By the time I post this entry, it will probably have been sitting in my “Drafts” pile for a while.

It’s something I’ve been wanting to talk about, but also kind of a touchy subject, and I didn’t want to be that person who complained that they lost too much weight. Like, everyone hates that person, right? Whoaaa, you’re too skinny? Rough problem to have, buddy. Good luck getting sympathy from anyone on the planet.

The last time I wrote about body image, I mentioned that because I still had my cast that I wasn’t sure what my weight was. When I weighed myself with the cast on, I was a couple pounds over my normal weight, and I figured the cast probably weighed 2 pounds, so I was probably about the same… I was wrong.

Earlier this month, I finally weighed myself cast-free. I was expecting the number to be high, since I had really not felt like I looked my best during the time I had the cast on. I wasn’t running, I couldn’t do any weight training, I basically just did the elliptical and crunches once a week. To be honest, I just felt like crap all 10 weeks that I had that cast. Physically, mentally, and emotionally. I can’t tell you how many times I burst into tears because I dropped a spatula holding my food while trying to cook one-handed.

In reality, I was shocked to see that I weighed 5 pounds less than my normal weight. Evidently, the cast weighed a lot more than I thought.

When I started actively trying to lose weight & get in shape in November 2010, it took me about 5 months to lose 10 pounds. So the fact that I all of a sudden lost 5 pounds in 10 weeks without trying was a *little* disconcerting.

OK, I was freaking out.

But I am a bit of a worry wart, and a hypochondriac at times (WebMD is totally an enabler of this condition, BTW). Most people I expressed concern to said it’s probably just a loss of muscle mass since I’ve been working out less.

Since that initial weigh-in about 3 weeks ago, I have been getting back into my workout routine (Still not running as often as I used to. It’s in the high 90’s here!). The results have been mixed: I keep bouncing back and forth between my post-cast weight, and 2 pounds heavier than that…which is still below normal.

Most girls would be ecstatic at the weight loss, but it came at a cost. Because it took my hand bone so long to heal (10 weeks in a cast, and 3 weeks later I’m still not 100%), my doctor ordered a bone density test. The test indicated that the density of my spine is at a level just low enough to be classified as osteopenia.

Osteopenia is like a stepping stone to osteoporosis. If you have osteopenia, your bone density level is lower than is considered normal, but not low enough to be considered osteoporosis. It is normally seen in older women, and some causes include a lack of calcium and/or vitamin D, not enough (or too much) weight-bearing exercise, and low body weight. Early on in my research about the condition, I learned that I’m in good company:

Gwyneth Paltrow announced a few years ago that she has osteopenia, and there was a lot of speculation about the role her diet played in her diagnosis. She followed a diet that I would consider pretty healthy: lots of whole grains, vegetables, and fish. It also, however, cut out most dairy and red meat. Calcium can come from foods other than dairy (leafy greens like arugula and kale, almonds, etc) but, as the article points out, it seems irresponsible for a diet to cut out an entire food group.

Luckily, my bone density levels aren’t low enough that I need to take prescription medication, but I do have to take this huge sucker 1-2x per day now: 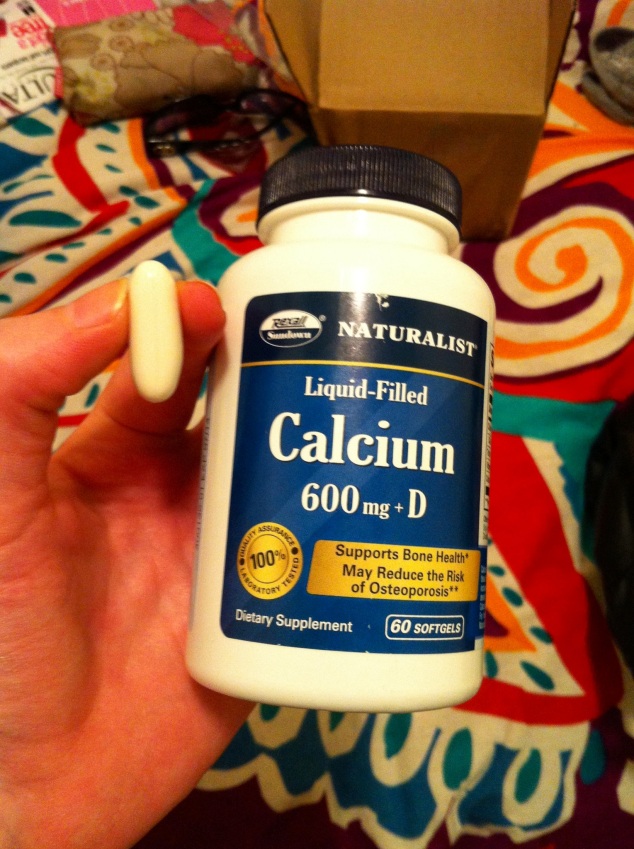 Since finding out about my low bone density, I’ve decided not to worry so much about my specific weight, and more about making sure I get the proper nutrients in my diet. I don’t eat very much dairy, so I’m trying to incorporate almond milk or yogurt into my breakfasts from now on. I also know that I need to get back into my more intense weight-bearing exercises, like running and lifting weights. But looking ahead at this weekend’s forecast, running is DEFINITELY not in my future.

The takeaway I’d like my female readers to get from this is that sometimes your head really isn’t in touch with the rest of your body. I felt fat, sluggish, and bloated when I had my cast on, and yet my body was more or less deteriorating. (Dramatic? Maybe….) Even now that I know how much less I weigh, I still find myself struggling with issues of “feeling” fat. I have to remind myself that the best I ever felt and looked was when I was both exercising a lot AND eating a lot. And not just eating a lot, but eating right. As I’ve said before, I don’t like that women aspire to look like a specific super model. Find the weight that is right for you and your body. Whether you fall below the correct body weight, or high above, your body is going to feel the effects.

Have you ever had sudden weight loss? What was the culprit?

9 thoughts on “Of Injuries, Body Image, and Osteopenia”