So there’s this pretty generally accepted notion that if you’re on vacation, you can’t eat healthy.

While it’s definitely harder to watch what you eat – and much easier to overeat – when traveling, I don’t think it’s impossible to come back from a trip weighing the same you did when you left.

That being said, I ate a LOT this weekend at Blend Retreat. And my favorite part about eating with these ladies is that, before every meal, we ALL whip out our phones to take pictures of our food. Healthy living bloggers, you are so my people.

But this post is not about exercise. That post is forthcoming. This post is about not feeling guilty, it is about indulging (but not too much), and it is about balance. Balance, people!

And because it just happens to be Wednesday…I’m linking up with What I Ate Wednesday hosted by Jen!

After a really good happy hour at Gracie’s in Salt Lake City on Thursday night, I split an entire thin crust pizza with Julie at Setebello. And I didn’t feel like I was gonna explode afterward. My secret? I didn’t eat the crust. Why waste precious stomach space with crust when there is prosciutto, arugula, blackberries and balsamic glaze to be consumed?!

This was far from the only great food we had this weekend though. The next day, we were off to Park City, and in the evening enjoyed cocktail hour and dinner!

During a weekend filled with very little makeup and lots of sweat and exercise clothes, the cocktail hour is always a super fun opportunity to get a little spiffed up. Of course Becky & I both went with stripes 😉 That seemed to be the theme of the weekend for us! 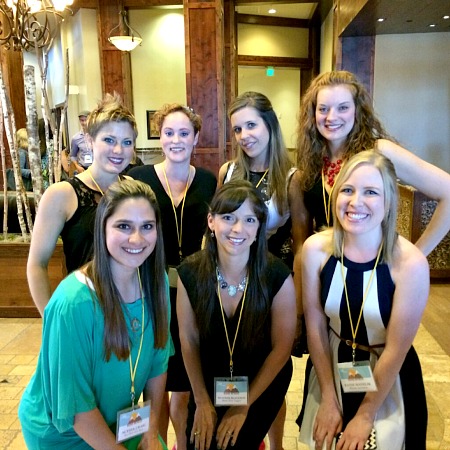 In addition to hanging with Becky, who I’ve known for over a year now, I was also lucky enough to be placed in a suite with possibly the best group of gals I could have asked for! Glad we ended up with at least one picture of the whole suite 🙂 I stole this gem from Meghan!

Anyway, the real highlight was this:

The cocktail hour was sponsored by Sizzlefish (who provided these amazing appetizers), and FLUROwater, who developed a few specialty cocktails for the choosing:

I chose the dark cherry champagne spritzer, and tasted just a bit of veggies & hummus, a black bean cake, and some AMAAAAZING king salmon from Sizzlefish. I was tempted to go back for more, but I wanted to save room for dinner!

More pizza! And more ditching the crust so I could stuff as many delish toppings in my gullet as possible 😉

They had a whole array of tarts to choose from for dessert, and, since I had a fruit tart last year, I decided on the salted caramel tart (in the back) which had a nice lil layer of chocolate ganache. Everyone at our table gobbled them up! It was so good.

Breakfast on Saturday morning was sponsored by Quest Nutrition, and in addition to an awesome protein-packed breakfast spread (plus some super crispy herby potatoes…nom), we had little treats made out of Quest Bars! (see lower right) What the what!?

For the rest of the weekend (besides breakfast), we were left to our own devices for food. That is, whenever there wasn’t a sponsored snack break or an awesome sponsor set up making goodies in the Expo room. Have I mentioned yet how amazing this weekend was?

On Saturday evening, we decided to go into downtown Park City to eat and drink at High West Distillery, which we heard great things about last year but because Blend was during the off-peak season in 2013, it was closed.

Becky and I split a bison-beef burger that was stuffed with an onion ring! It was so perfect to bite into after a day of protein shakes and bars 😉

However, I’m glad we split the burger and fries, because we had IPA’s to leave room for:

We love our hoppy, strong IPAs, so we are usually let down by the beer selection in alcohol-regulated Utah. But we discovered that the bar had Hop Rising, a double IPA by Squatters, and indulged in one 😉

…And maybe a cocktail too…

…With a side of photo bomb of course 😉

Before leaving on Sunday, we had to stop at Cafe Rio… AKA Chipotle’s even more amazing other half (yes, it’s possible!!)

But I was a bad blogger and didn’t take a picture. 😦 Guess you’ll have to find a Cafe Rio by you and see what the hype’s all about!

What are your tips for not overeating on vacation?

What is your favorite kind of beer?