As you all may remember, a little over two weeks ago I rolled my ankle on an acorn/pinecone/who knows what on my long run.

Pretty much we all can agree it was probably not my smartest choice to continue running another 5 miles after I pulled something in my foot on mile 3. I was in the middle of the trail, what other choice did I have?! I didn’t realize how bad it was until I stopped!!

Being that I have regularly run 15+ miles per week since my half marathon (in addition to playing Ultimate Frisbee and joining a gym), I knew that if I didn’t allow myself time to heal properly, I would not be able to continue at my current level of physical activity and would risk having ongoing problems with my foot.

That sounded great in theory. Until I realized that crutches.are.the.DEVIL. This is coming from someone who has been working on her upper body strength. I’m not weak…Crutches just frickin’ suck. I lasted about 24 hours on them before stealing my roomie’s boot from when she busted her ankle last year because without a car or the ability to ride my bike, hobbling around on crutches just wasn’t an option!

Best use I found for my crutches.

Luckily, the pain with walking went away in less than a few days. After hurting myself on Saturday, I limited myself to walking and biking only…until Friday morning, when I hit the elliptical in my hotel in Salt Lake City before we left for Blend Retreat.

When I attended Blend last year, I was not in my best shape. I was still recovering from mystery stomach issues (I remember feeling sick for most of the weekend…probably a mix of elevation sickness and anxiety), and the furthest I ever ran was 5k at nearly 10 minute miles. The only active thing I participated in all weekend was the hike, since my not-a-morning-person self couldn’t be bothered to wake up for 7am boot camp. Not to mention the Katie-And-Becky-Can’t-Hang-Out-Without-Getting-Deathly-Hungover pact. It’s tradition 😉

This year, I was ready to redeem myself. I now wake up between 6-6:30am at least 3 weekday mornings each week to run or work out. I ran a HALF FREAKIN MARATHON (I still can’t believe this fact most days), and have continued to run 8-9 miles every Saturday since.

Andddd then I rolled my ankle.

My foot was feeling pretty good in SLC, so I decided that I would still participate in most of the activities of the weekend, with two rules: no RUNNING and no JUMPING.

It worked out for the most part. Check out fitness activities we did (cue 10 million pictures stolen from Lindsay’s husband Travis because he is amazing!!) 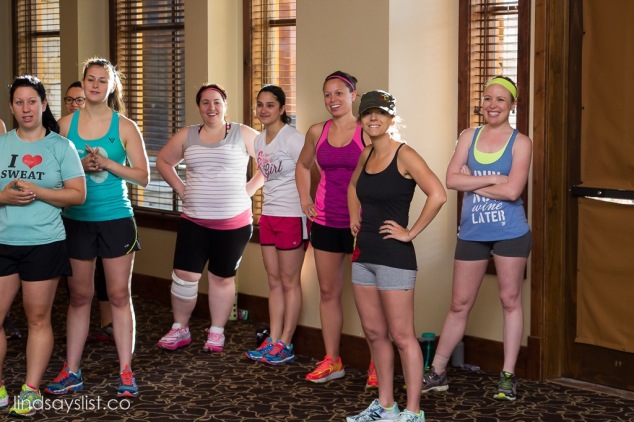 Smiling because we didn’t know what was coming. 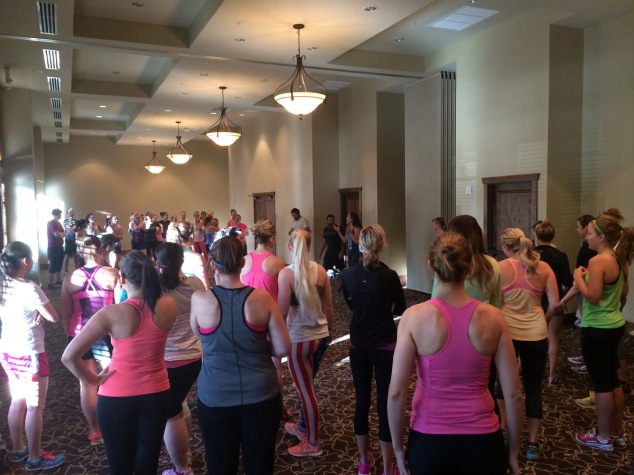 What was coming: Bootcamp hosted by Onnit. Becky and I somehow made the mistake of standing in the front row, so there are a ton of pictures of us. Luckily, we look like bad asses!

This was during the yoga/stretching that Jennifer from Onnit led before Orlando started us on 10 bajillion lunges and squats. 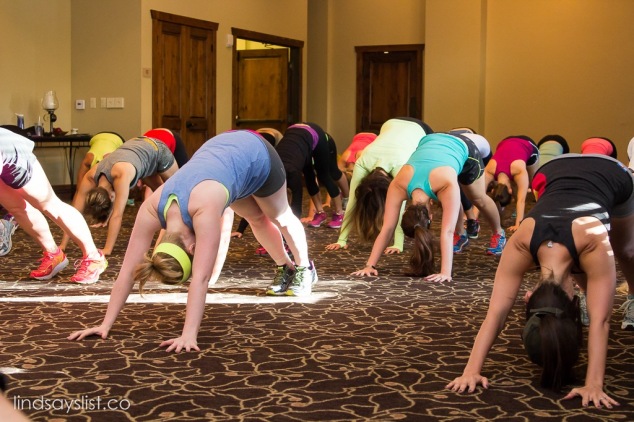 Who knew I had shoulder muscles?!

We all refueled at breakfast in time to go on a hike sponsored by Organic Valley.

We took gondolas up to our jumping off point. It was slightly terrifying (and I loved it). It looks like Laura and Amanda were less freaked out than I was! 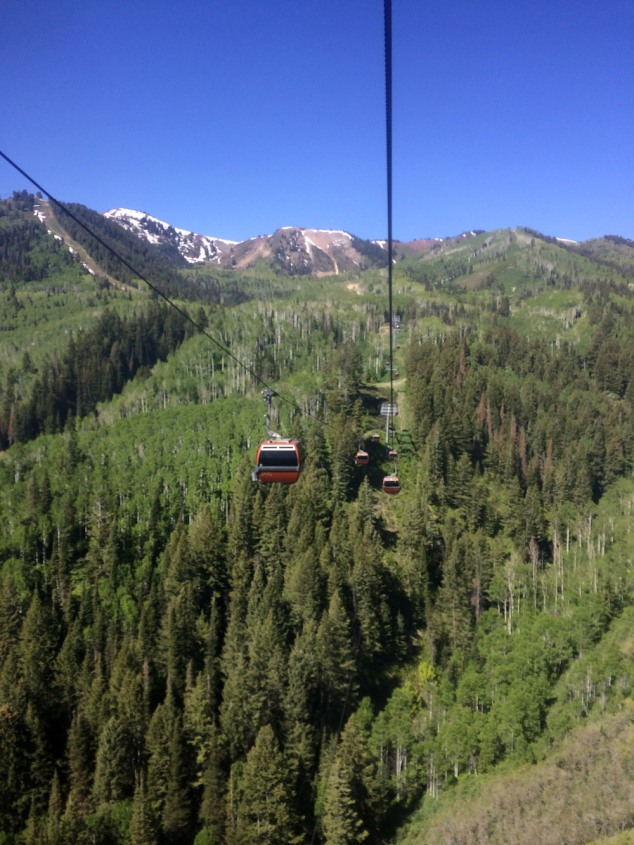 The views were definitely worth it! 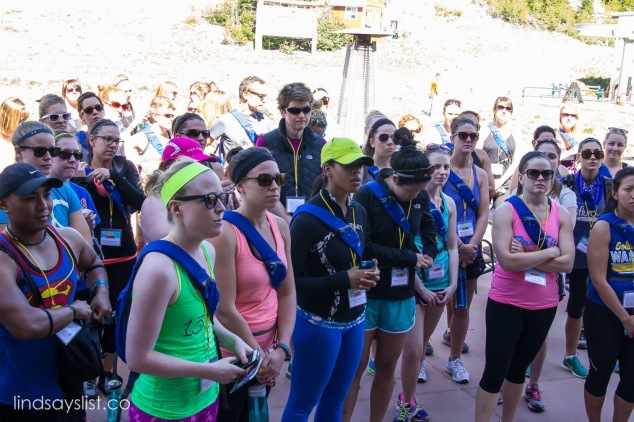 Once we got to the top, we learned about Organic Valley and their protein shakes (that seriously taste like chocolate milk, and have a really great {short} ingredient list!) before hitting the trail with NYC celebrity trainer Joel Harper. 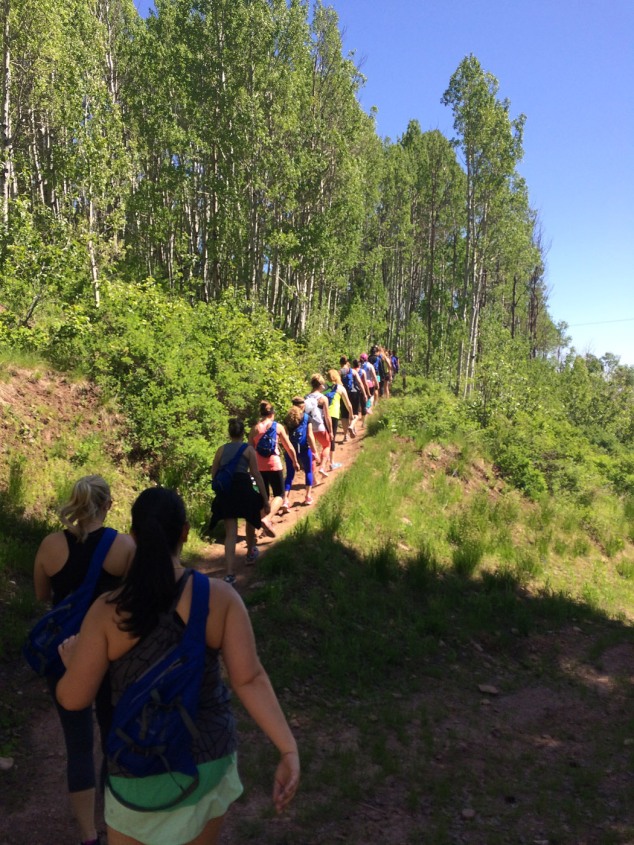 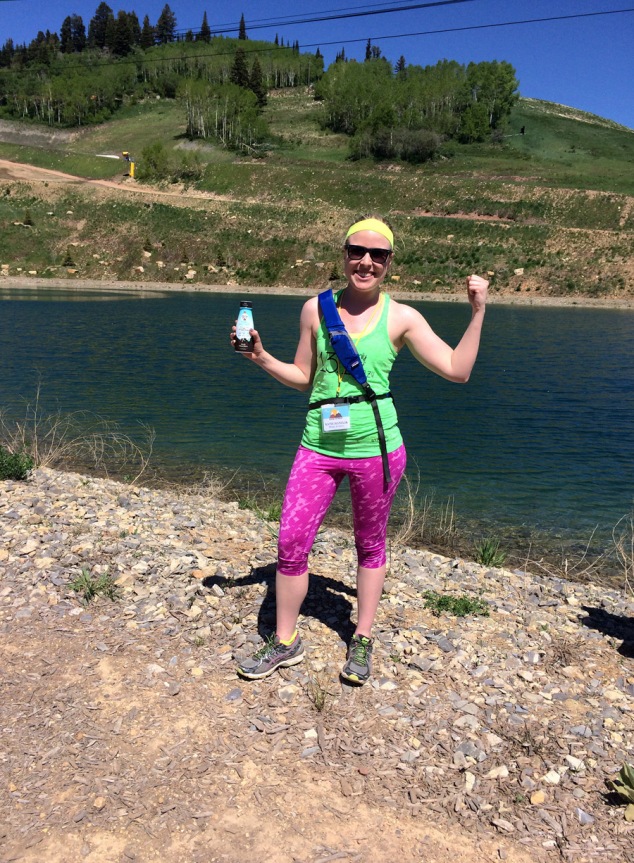 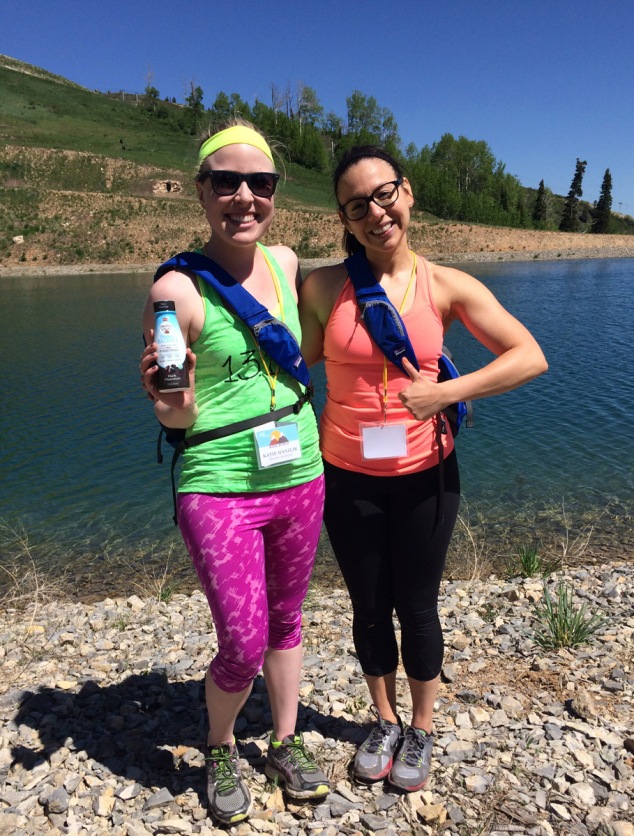 Me with the super sweet and lovely Julie!

Next was the treacherous part. We were given 2 options: either take the gondolas back down, or continue on a 45-60 minute hike down to the bottom of the mountain. Since the uphill part of the hike was pretty good on my foot (and I was still in MUST REDEEM MYSELF FROM LAST YEAR mode), I decided I would hike all the way down.

Again…maaaaybe not my best choice.

The 2nd half of the hike included a lot of very steep downhill climbing, which actually wasn’t the worst part. The worst part was the dirt/gravel path we followed the rest of the way, filled with rocks that I stupidly re-rolled my ankle on…several times.

I felt pretty dumb at this point, but I went to the pool and swam and iced my foot for a couple of hours and it seemed to be getting better.

At this point, you can also imagine we were pretty sore, between lunges, burpees, and squats, and a 5ish mile hike. 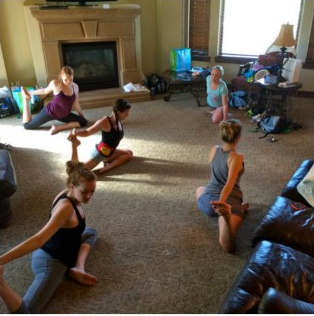 Yoga to the rescue!!

Kait led a few of my suitemates, a few other girls, and I in a restorative yoga session in the living room of our suite. It was JUST what the doctor ordered, and I learned a few awesome ways to stretch out my hips.

I have actually never taken a yoga class before (I’ve attempted yoga poses before for fun, but nothing serious), and seriously one of the high points of the weekend was Kait telling me my downward dog was perfect. #yessssss

The rest of the evening was spent walking around Downtown Park City, and may have included some dancing 😉

Because we had a late night, I skipped boot camp on Sunday morning. I did, however, make it to dodgeball when I got back to Sacramento that night, which proved to be pretty sweaty in 105+ degree heat!

After I returned, I pretty much bounced right back in to my normal workout routine, with the exception of running. I didn’t attempt running until my Ultimate Frisbee game on Wednesday (I usually average around 5,000 steps, or 3+ miles!), and since that went well, I ran 4 miles on Thursday.

Oh, and then Saturday happened….. 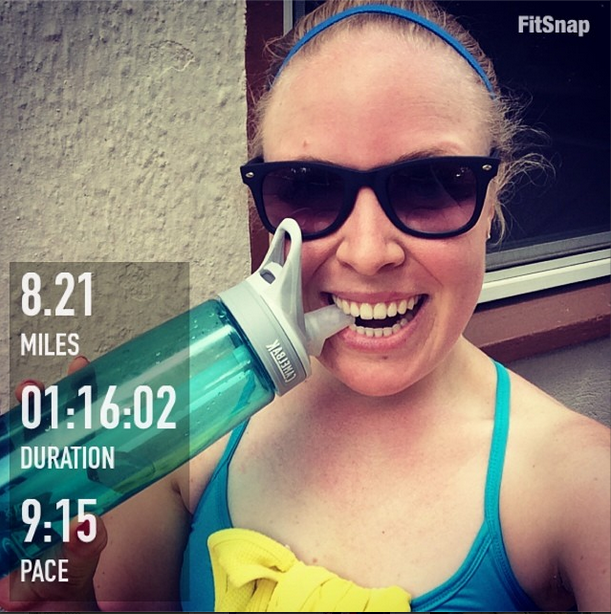 So much for taking it easy.

I still have occasional foot pain whenever I flex my foot or apply pressure to the injured area. However, it’s manageable. I went to boot camp yesterday and did a few jump squats and burpees, but if it hurt, I modified and went to my tippy toes instead of jumping (this is what I did at our Onnit boot camp as well).

Sadly, I don’t know if I’ll be able to give up running at least twice per week, but just like when I had knee pain while training for my half, ice is my friend.

Overall, I’m glad I took it easy for about a week after injuring myself, though I’ll admit I could have probably done better. It’s hard to trust that you won’t get fat and out of shape if you skip more than a week of workouts, am I right?

What’s the longest you can go without working out before feeling like you’ve fallen off the wagon?

Where is your favorite hike?