After attending BLEND Retreat, one thing I promised to talk about that I haven’t quite gotten to yet is Park City itself. I’ve talked about all the food we ate, the exercise we did (OK, mostly the hike, since that was all I was up for!), and the swag we got.

But now I am here to tell you all about this little mountain town that attracts thousands of guests year after year! Albeit several weeks late…but better than never, right?

The only experience I had traveling to Utah was in 2010, when I had a layover in Salt Lake City with my parents. We missed our connecting flight [we were flying from Sacramento to New York] so we had 6 hours to kill at the airport. Naturally, we decided to go on a tour of Temple Square in Downtown SLC.

That’s another story for another day, but suffice it to say Mormonland is super interesting!

Park City, however, which is about 30 miles southeast of Salt Lake City, is a completely different beast. 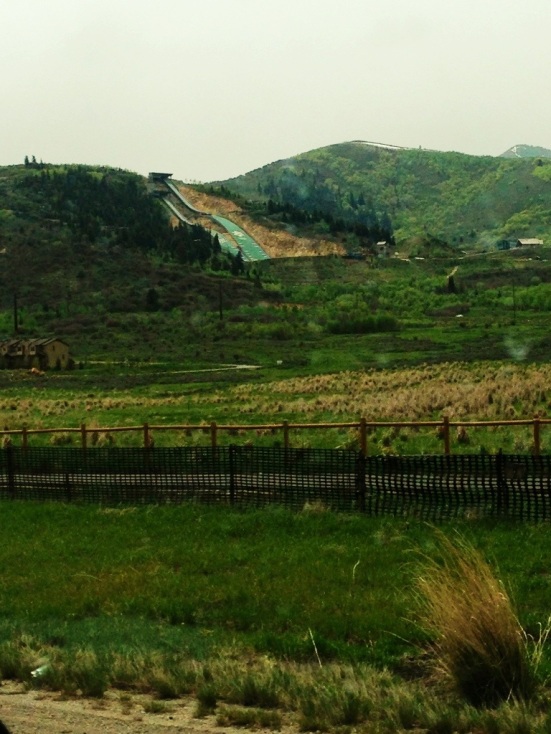 In 2002 when the Winter Olympics were held in Salt Lake City, lots of the events took place up in the nearby mountains. Check out these remnants! #olympicsnerd 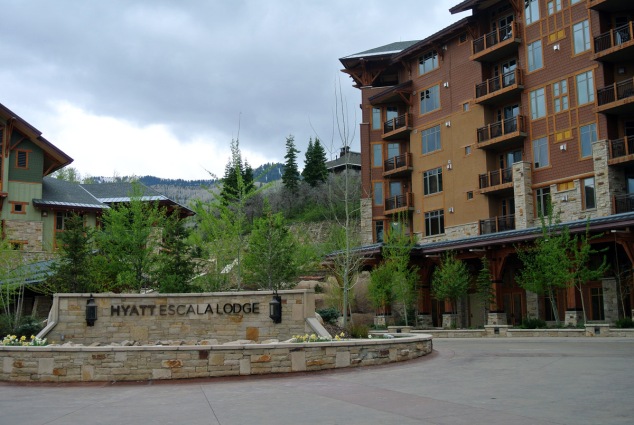 As I’ve mentioned, we stayed at the beautiful Hyatt Escala Lodge. It is one of quite a few hotel-resorts in the Canyon Resorts area of Park City – just a quick drive up the road from “Downtown” Park City.

we had to walk through several other hotels to get to our hiking trail – they all seemed lovely!

There are tons of ski lifts in this area, which I’m sure makes it a great place to visit in the winter months. We enjoyed walking to a beautiful hiking trail where we got this stunning view:

You can even see the resorts in the distance 🙂

The Hyatt itself was amazing. The grounds were beautiful, reminiscent of a big cabin in the mountains, but also very elegant and modern at the same time.

The restaurant in the hotel was the location of our breakfasts, and they also hosted our cocktail hour (complete with delicious appetizers!). It is a huge space with giant windows, letting in lots of light. Loved eating meals here! 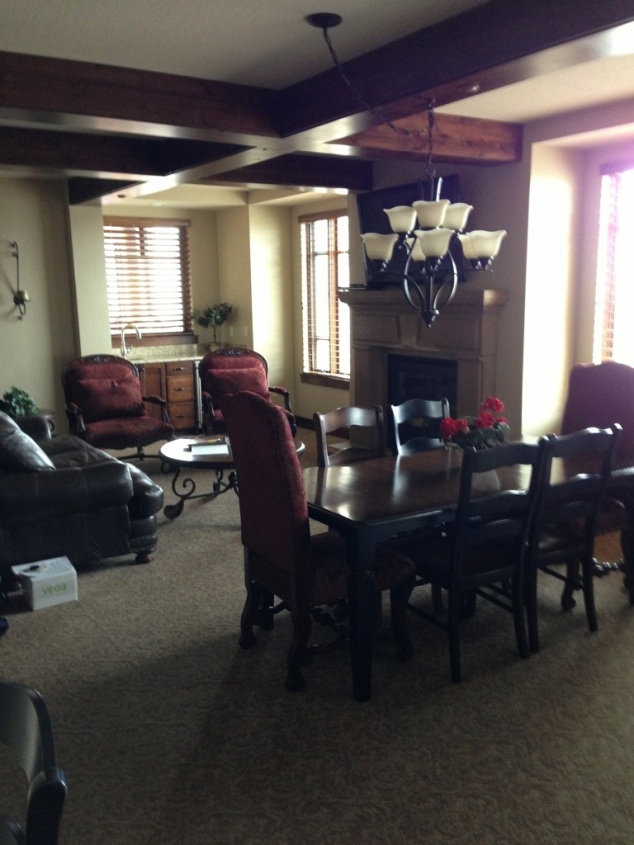 This is just the living room. And I totally slept on that couch (didn’t even need the pull out)…couldn’t believe how comfortable it was!

All four of us (Becky, Carly, Arlene and myself) kept saying the things in the kitchen were nicer than our own things at home. Because they WERE. Haha. It was such a nice place to just sit and relax during the few breaks we got throughout the weekend.

All in all, I can’t say enough good things about the Hyatt Escala. The service was also top notch…not to mention handsome, as pretty much every single lady in our group remarked throughout the weekend 😉

There is one main street in Downtown Park City…and it is literally called Main Street. 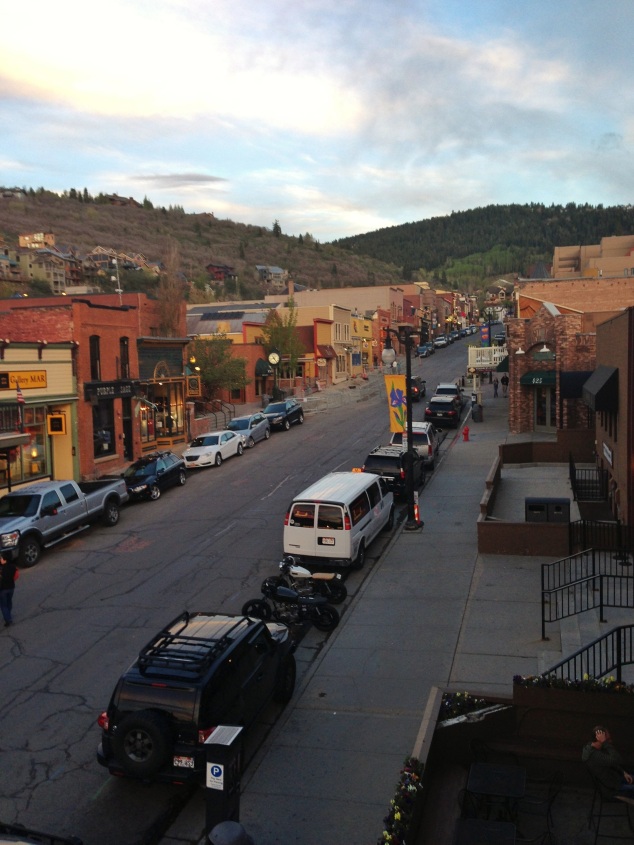 It plays host to tons of shops, restaurants and bars. Even a dance club or two! Here are the spots I checked out:

On Saturday night, a group of us decided to go to Wasatch Brew Pub for dinner before going out on the town. I decided Saturday would be reserved for sampling some local beer! I got beer recommendations from one of the [many] handsome front desk guys at the Hyatt, and off we went to dinner.

I told said front desk guy that I like hoppy beers, and he told me I had to try Hop Rising by Squatters Beers. It’s a Double IPA [which means STRONG!] and I loved it. I’ve rarely met a Double IPA I didn’t like…I think many breweries take care to keep their double IPAs from getting too bitter and overpowering.

Paired with a black bean burger and sweet potato fries. Hilariously enough, most people at our table ordered this burger. It was super funny to me that we all ordered the same things [either this or the Avocado-bacon-chicken-lettuce-tomato & Swiss sandwich]…clearly we were all looking for the healthiest items on the menu!

the whole group! i believe this was stolen from Carly 🙂

All in all, it was a great dinner! Definitely recommend!

While we were eating our gourmet dinner on Friday evening, our table was debating whether or not to go out for a drink or two. Debra brought up a great point: Who knows when we’ll be in Park City, Utah again…if ever? It was this “carpe diem” attitude that led me, Debra, Brittney [of The Laughing Cow], & Orlando [of Onnit] to go out after dinner on Friday night and see what Park City was like. We went to O’Shucks, a quirky little dive bar, followed by No Name Saloon, one of the more popular spots in town. On Saturday after dinner at Wasatch, most of our dinner group ended up repeating the same two bars that us 4 had been to the night before.

If you’re from out of town and planning on going out to bars in Park City, there are a few things I noticed that were different from most places I’ve encountered in California and elsewhere:

On to the bars!

O’Shucks is for sure a dive bar by my standards. The drinks are cheap, there are peanut shells on the ground, and it’s small and cozy. The highlight for me was…cheap schooners!

After seeing them on Friday night, I had to come back and get one on Saturday. I had never had one before! I ordered an IPA, thinking I was totally scoring by getting a goblet of strong ass beer for only $7. Of course, this is before I knew about the aforementioned liquor law, and I basically ended up drinking a watered down version of IPA.

I’d say there was about 1.5-2 pints in the schooner. I decided not to finish it, because I wanted to save room in my tummy for some other [tastier] beers.

No Name is right next door to O’Shucks, and it’s basically a fancied up version of the same concept. We spent a lot of time here both Friday and Saturday nights, and I got the feeling it is a popular hangout amongst Park City dwellers. 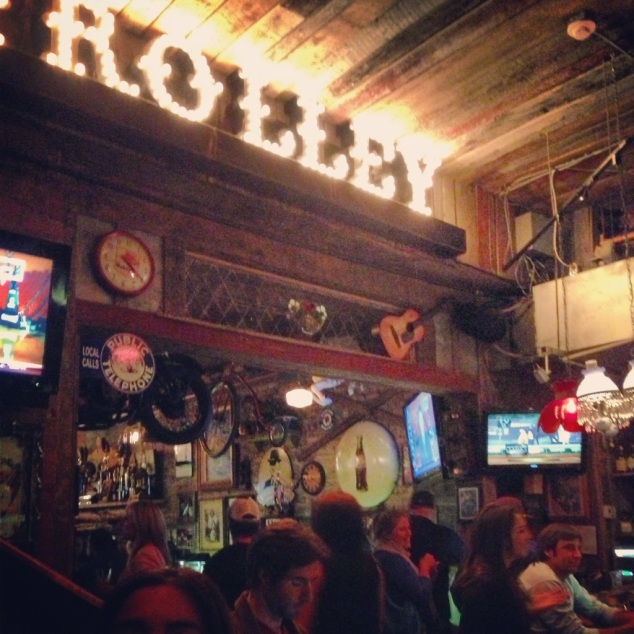 They had a cool upstairs patio, which boasted great views and great people watching 🙂

I ended up playing Buck Hunter both nights:

I thought it was the super “Utah” thing to do, and apparently didn’t learn my lesson when I spent most of the game Friday night shooting cows instead of bucks 😉

On that note, I hope you travel to Park City some day! I had a great time, and loved getting to know my Blends better over great food and drinks!

Us at the SLC airport on Sunday – Carly, Brittney, Becky, Sara and I.

Have you been to Park City or Salt Lake City?

Have you ever arrived at a place where you’re surprised to learn their laws are different than your own?