As many of you may have surmised (between my call for stomach pain remedies and my weird diet), I had some GI tests (both upper and lower) last week.

(I hope not too many of you under the age of 50 have had to experience this nasty stuff…yuck!!)

Long story short, I’ve been having abdominal discomfort and nausea for months (remember when I got my cast off and discovered I had lost weight?). I lost 5 pounds when I was injured that never came back…in fact, this time last week, that number had risen to 7 pounds. It all accumulated into some big time abdominal pain and a 101.7 degree fever the days after Thanksgiving. That week, I saw 3 different doctors at 3 different Kaisers. GI tests were ordered and antibiotics were prescribed for the infection/diverticulitis the doctors thought I was experiencing.

I did the weird diet, I did the fasting, and I did the prep. My sweet mom took me to Kaiser, where my friend Mike‘s mom (you may know Mike as the YouTube celeb behind the Sexy Sax Man video) was randomly my nurse and did the Gangnam Style dance when she found a vein for my IV, haha. Great nurse, or GREATEST nurse?? 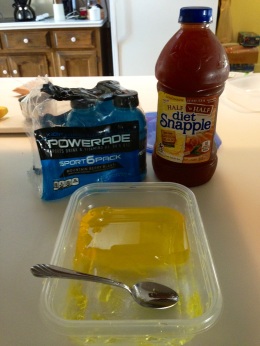 Anyway, the initial results were pretty inconclusive. Based on what he saw in my stomach, my doc thought I might have a food allergy, but everything they tested for (I’m guessing common “allergies” like dairy, gluten, nuts?) came back negative.

So, I’m stumped.  Since then, I’ve been feeling alright. Not 100% better, but not as bad as I’ve been before either. I am almost done with the antibiotics, and I’m wondering if maybe what I was feeling for the past few months was directly related to my post-Thanksgiving sickness. Maybe I had a low-grade infection for a long time and suddenly it finally blew up?

I am also convinced that a lot of my issues are mental and anxiety-based. I have a pretty severe fear of vomiting, so the second I feel sick I get panicky. So I’ve decided to focus on eating better. And as my parents and boyfriend have been urging me, eating more. These issues all began 3-4 weeks after I moved into my apartment…which makes me wonder if I haven’t been taking care of myself as well as I should be.

I recently read this article titled “When Eating Healthy Turns Obsessive”. The article uses a term for a new kind of eating disorder called “orthorexia” to describe people who eat healthily to the point of cutting out too much. I don’t know about coining a term for a new eating disorder based on the tendencies of a few people, but I did find it frightening that I related to a lot of what the women profiled in the article were saying. I wonder how many healthy food bloggers also relate…

“I worry that if I start eating in an unhealthy way I’m going to start having stomach issues.”

“I basically cut out everything from my diet. I convinced my mind that food made me sick.”

So, I am setting goals for myself. I’ve used Lose It, a calorie counting app, for a long time, and since September I’ve set my program to “maintain weight”. I never seem to hit my daily max for calories, but I think the biggest benefit of the app is being able to track nutritional stats. So in an effort to get my body what it needs, I’m going to set out some nutrition goals to be tracked on Lose It. I also will keep track of what I’m eating, and look back at days when I feel sick to see if maybe there is some kind of food allergy going on.

Definitely an area where I need to improve: My average is between 35-43g per day, and in the teens percentage-wise. Definitely should try to stay stocked with Greek yogurt and chicken in the future, and focus on protein-packed meals on the days that I am active!

I’m pretty good about this one, but I think I will survive if I restrict myself less. Avocado and hummus are two of my favorite foods AND they are healthy fat sources! Bring ’em on!

There’s a lot of conflicting opinions these days about carbs. A lot of Paleo Diet enthusiasts swear that grains are killing us, but I love bread too much to believe that! I’m a believer in the benefits of carbs coming from whole grains. As far as sugar goes, I don’t really eat too many sweets or fruit, so I don’t think I’m at risk of overloading on sugar.

I’m usually good here (I do love me some beans and salad!), but I often skimp out on the weekends, which I often spend at T-Man’s place. Gotta get him to buy some whole wheat bread for a change! 😛

Do you ever feel like you’re eating too healthily? Do you think that’s even possible?

Check out my blend (blog friend :)) Emily’s take on how to be healthy during the holidays. She is a dietician-in-training, so I trust her tips!!  It’s refreshing to see someone say that it’s OK to indulge.

Going back to work after a long holiday weekend is the worst.

It’s especially the worst when you’ve got abdominal pain like nobody’s business. I’ve been having stomach problems for nearly 6 months now, and though all the food was delicious, the fact that I had three, count ’em, 3 Thanksgiving meals didn’t help. My body is screaming for help.

What are your tried and true at-home stomach remedies? For upset stomach, nausea, acid reflux — SPILL! I need it all.

Back to the subject at hand: 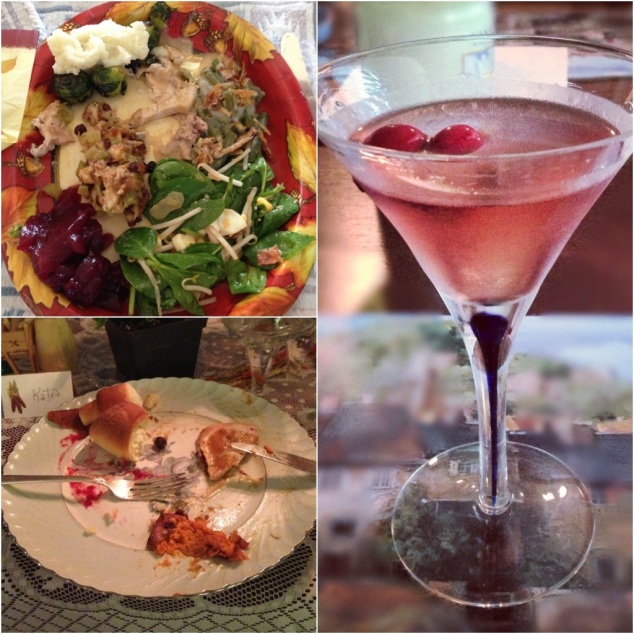 Thanksgiving. We had three of them. Two on Thursday (above: my family’s, below: his dad’s) and one on Friday (right: his mom’s). I love seeing all the differences in family traditions: my family shows up early in the day, mostly clad in sweatpants, and does everything buffet style. Our other thanksgivings were a little less casual, with sit down dinners. And I’m pretty sure they had no sandal-wearers at the table. 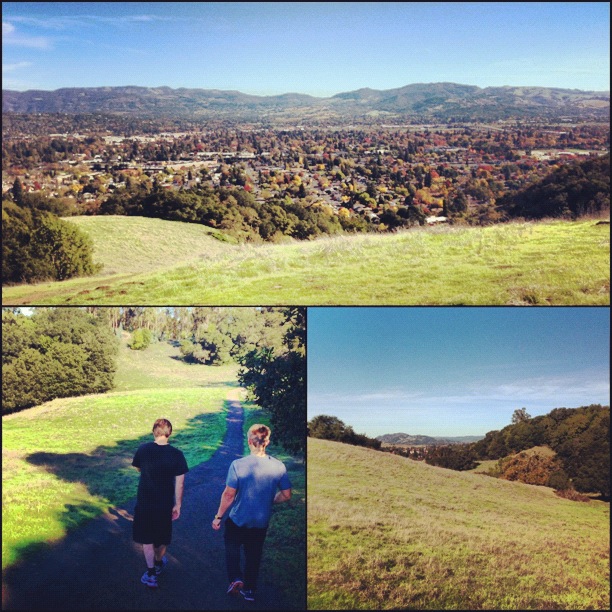 Friday morning, we went on a little hike in Napa (where most of T-Man’s family lives) with T’s brother to burn off some turkey. Northern California had beautiful weather all weekend!

We came back to Sacramento on Saturday to celebrate (har har, see the name of the beer?) T-Man’s birthday with our friends…….Which led to Sunday brunch at Golden Bear. We’ve been to Golden Bear many times, usually for dinner, or late night drinks, but never brunch! I got Chilaquiles (top) with an over easy egg on top…chilaquiles are quickly becoming my favorite brunch item! T-Man got the Breakfast Lucy (bottom), which is a ridiculous open-faced spin on their normal Juicy Lucy burger. Our friends got the breakfast sando and breakfast burrito and were both also satisfied. Golden Bear might have to be our new go-to brunch spot! 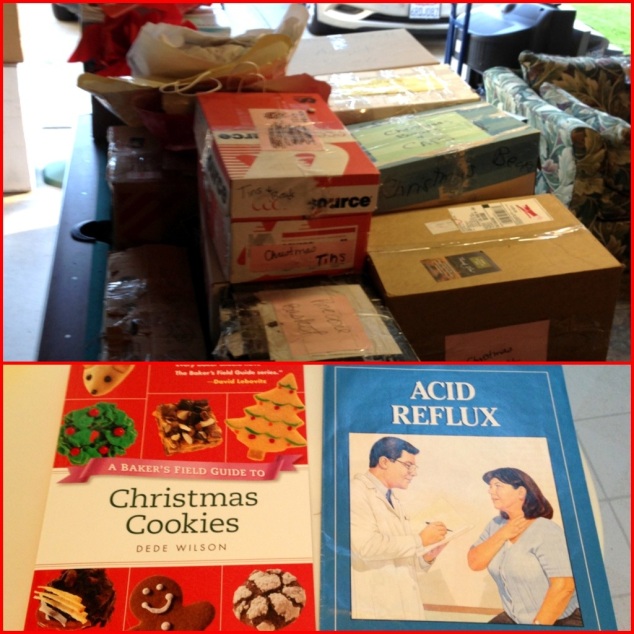 After brunch, I went to my parents’ house to help put up holiday decorations. Check out all those boxes we lug down from the attic every year! Also, my mom gave me a couple of books to bring home. Story of my life: baking cookies and having stomach problems. FML.

Hope you all had a great Thanksgiving weekend. Don’t let the Monday blues get you down! (and I will try to do the same :-P)