Now I’m sure most of you are just as ecstatic as me, but probably for different reasons. You’re probably all excited for it to be over with, sick of hearing your friends complaining on Facebook, posting long tirades, and the like. That actually doesn’t bother me too much…I’m known to share news articles and add a couple of comments myself from time to time. Plus, my life is basically all politics all the time anyway. (I work at a lobbying firm, my roommate works at the State Capitol, my boyfriend works on campaigns…) I’m even considering getting a masters degree in Political Communication some time in the next couple of years.

But the reason I’m excited is two-fold. First, I am also excited for it to be friggin’ over with, but that’s because T-Man has been working on a seriously close congressional campaign since the beginning of June. Long hours, stressful days, late nights working at home after he gets off…I knew campaign jobs were tough, but I’ve really been seeing it first hand now.

The other reason I’m excited is because the presidential race is super close and I LOVE watching election results. (Nerdy, I know) This time four years ago, I was living in France, had already sent in my absentee ballot, and was getting ready to stream election results all night long on my laptop. And I did. (And I wrote an article about it that was published in the UCSB newspaper!) It was such an interesting experience to see how French attitudes toward me and my American friends changed after Obama’s election in 2008. Can’t wait to see what happens this time.

I truly believe that everyone should at least take a minor interest in politics and how their government works. What happens at the polls affects us in so many ways that a lot of people don’t think about. Especially us in California, with all of our voter-created propositions. Get out and vote tomorrow if you haven’t already!

Even my grandpa’s vote got counted (via absentee ballot) just days before he passed away. And that leads me to my weekend. I took Friday off to unwind a little and help my parents prepare for my Papa’s service the next day…and the rest of the weekend was spent celebrating him! (I swear you guys will get to stop hearing about this sad stuff soon!) 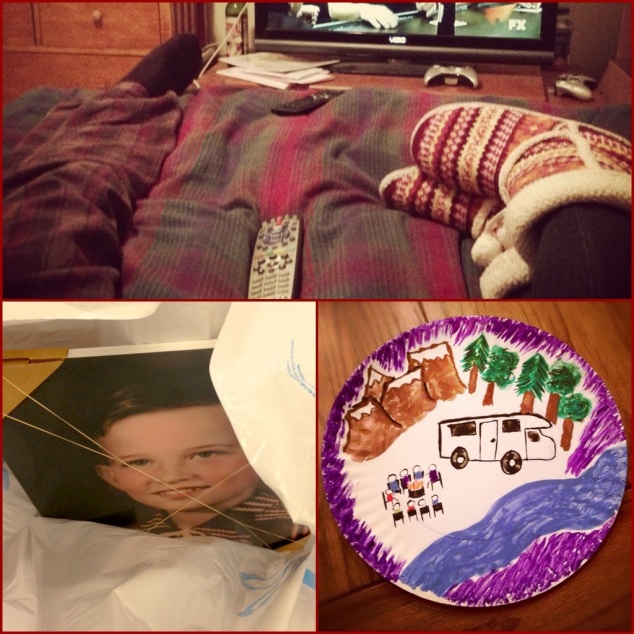 Cozy Thursday night with T-Man celebrating our early weekend — Next day, picked up posters of Papa for the service and painted a paper plate (each of the grandkids did this, it was something he used to always do with us when we did arts and crafts while camping) Flowers from the service back at Grandma’s house for the after party — We donated a tree in Papa’s name to the YMCA and had people write wishes on little cards and tie them to the branches. This one was my Grandma’s — Before leaving yesterday morning, we all gathered around the oak tree behind my grandparents’ house and said a few prayers for Papa.

When I came home last night, the flowers T-Man bought me (he couldn’t come to the service) had finally bloomed! — When I came back to work this morning, I had this awaiting me 😦

Back to the grind, but not for long! T-Man and I are leaving on vacation Saturday morning! We have had a visit planned to New York for a couple of months now to see friends and my family. Luckily, my aunt who is hosting us finally got her power back last night! Now send your good vibes to my best friend and her roommate (another close friend) that they’ll be allowed back into their downtown Manhattan apartment soon so we can all take a break from the craziness and have a fun time Saturday night!

In the meantime, I’m going to put the bottle of champagne T-Man’s mom got me for my birthday in the fridge to chill…even if his candidate doesn’t win, his campaign finally being over is reason enough to celebrate!