Here are excerpts from and links to a couple of pieces I worked on in the SN&R in the past couple of months.  Enjoy!

Each day, millions ‘check in’ on smartphone apps like Foursquare, where the top users are dubbed ‘mayors.’ Some mayors are strong, others just want to booze. All offer a real-time peek at privacy, partying and modern Sacramento.

It isn’t easy to get in front of a crowd, expose yourself to hecklers, reveal your darkest secrets and let it rip. But for these Sacramento comedians, performing stand-up is just another day at the office. Some find jokes in their own hilarious—or pathetic—lives, others find inspiration in the absurdity of the world around them. And when all else fails: dick jokes.

Here’s just a small taste of what the local stand-up scene has to offer.

This isn’t the first time Republican lawmakers have pushed to ban federal funding for NPR. But this time, they’re going in for the kill.

And this most recent threat to public broadcasting has inspired discussion among NPR listeners and broadcast executives in Sacramento, who now seriously ponder the question, “What if?”

I first heard about the tragedy in Tucson on Saturday morning via Twitter.  It was shocking news, but at the time I didn’t have a computer nearby and since there were conflicting reports about whether Rep. Giffords had survived, I decided to wait until later in the evening to tune in and find out what had happened.  I assumed it was an assassination attempt, maybe from the other side of the political spectrum, but most likely from someone who was just plain unbalanced.

Hours later, I went to my computer and checked Facebook and Tumblr.  There, I didn’t find statuses and posts about what had happened or who had died, but rather, pictures of Sarah Palin’s now infamous map “targeting” Democrats and other various links about politicians using gun rhetoric.  In the hours between my first hearing about it and my Facebook log-in, Sarah Palin’s name did not once cross my mind.  But all of the hoopla surrounding the shooting got me thinking.

A liberal NPR cartoonist’s take on the backlash.

END_OF_DOCUMENT_TOKEN_TO_BE_REPLACED

Since moving home after college, I’ve fallen into a bit of a routine each evening.  I pick my mom up from work, we hang out for a while, maybe watch Oprah, and I help her cook dinner.  Exciting life, I know.  While cooking, we watch the local news, followed by the national evening news.  My mom loves watching CBS because I’m pretty sure she’s a feminist at heart who likes hearing her news from a fellow woman, Katie Couric.  As for the local news, I can’t really discern many differences between our main local stations, besides perhaps differences in their color schemes and graphics.  But the other night, my mom made a negative comment about one station in particular, that she thinks, “gets all their news from their viewers.”

She definitely had a point – in examining this particular station’s website, I found that they have a “SEND it” section where all viewers need to do to contribute to their local evening news is upload a photo, video, or audio clip and provide a title and/or description.  That night, the only “news” that came from a viewer was a picture of an adorable fox in a pot on a backyard porch.  I have to wonder, though, what happens when regular people use platforms like this to give their take on actual important events, rather than providing silly pictures that would be worthy of feature in Will Ferrell’s film, Anchorman.

The problem with this kind of “at-home” reporting, I find, is two-fold.  First, for lack of a better term, it’s a cop out by news outlets.  Instead of actually going out, chasing down leads and earning the scoop, it seems that many producers and reporters are allowing their viewers to do the work so that they can reap the rewards.  Take, for instance, the Terms of Service one must agree to when submitting their own material to the aforementioned news site:

“When you submit or post any material via the Site, you grant us…a royalty-free, perpetual, irrevocable, non-exclusive, unrestricted, worldwide license to use, copy, modify, transmit, sell, exploit, create derivative works from, distribute, and/or publicly perform or display such material…for any purpose that we choose.” (news10.net)

In other words- we will not pay you for it, no matter how much money and credibility it brings us!  Now, I know I may be being a little dramatic, as I’ll admit I don’t believe too much damage could ever be done by user-generated local news content.  But let’s widen the scope: 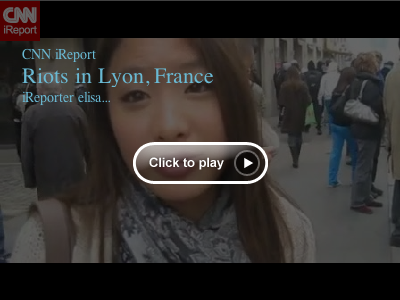 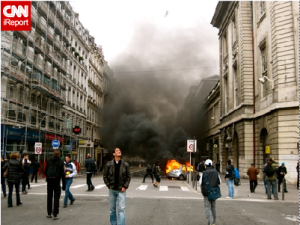 The above video and photo were shot by one of my students from my internship this summer in Lyon, France.  A lot of the students found themselves in precarious situations about one month ago, when the streets of Lyon were overcome by students and young people rioting in response to President Nicolas Sarkozy’s retirement age change.  Elisa, a 3rd year International Studies major from UC San Diego is the kind of person I’d call a true scholar of life, with extensive experience abroad.  When she posted a Facebook album with all of these incredible photos, as well as the above video, friends (myself included) urged her to send them to CNN.  She did what I’m guessing was the easiest thing possible for an American student living in France to do- upload them to the CNN iReport website.  Her footage was soon vetted by a CNN.com producer, and Elisa was ecstatic.

Here’s my problem with you, CNN iReport.  This was a pretty incredible piece of journalism.  The video provides a first-hand account of an American living in Lyon and takes you through her and Lauren’s whole range of emotions: excitement, fear, confusion, awe.  And I’m assuming the photo was pretty good as well, since it ended up on the front page of CNN.com International for a day.  So how can Elisa put this on her resume, should she so choose?  If iReport’s Terms of Service is anything like my local news station’s, I’m guessing she probably can’t.

Besides the fact that media outlets are using user-generated footage without always giving proper credit where credit is due, I have another problem with “at-home” reporting.  I think it’s a generally accepted fact that globalization has changed the news industry.  With the addition of social networking sites like Facebook and Twitter, anyone can report anything from anywhere.  The elections in Iran in 2009 and the student protests that followed are a great example.  My fear, however, is that actual news organizations are beginning to blur the lines between social media and actual legitimate media outlets.

I searched through CNN’s iReport section for a while to see what kind of “reports” come in to the website.  In a section where producers call out for stories and videos about the cholera outbreak in Haiti, I found everything from heart-wrenching accounts of helplessness and survival, to a video titled “Raise da Roof in Haiti”, to a step-by-step pencil drawing of CNN anchor Anderson Cooper.  Clearly the choice to turn over the reporting to the people yields mixed results…not all the iReporters find themselves in the middle of exciting news stories like Elisa did.  The section of the website dedicated to profiling all of the “iReporters” resembles a 16-year old’s MySpace friends list more than anything else.  And it could very well be- the iReport Community Guidelines states that you only have to be 13 years old to contribute to the website.

New York Times journalist Anne Louise Bardach taught a Global Journalism course at UC Santa Barbara in 2008.  She epitomized what 19-year old me, dreaming of a career in the industry, imagined a real journalist to be like.  She told the class about how waiting at the morgue for days on end, prying at the coroner for any scoop she could get, led to her being present when Sid Vicious’ girlfriend Nancy arrived dead.  She talked about being ejected from Cuba and getting in trouble countless times, but how her persistence eventually got her an exclusive interview with Fidel Castro.  Real journalists are unrelenting and hungry for knowledge, and they are unfortunately a dying breed.

The media industry should limit how much they take advantage of amateurs and remember what it’s like to chase down a lead, or to be the first one to discover a major story themselves.  Real, hard-hitting journalism may be endangered, but it doesn’t have to become extinct.  Allowing students and non-industry professionals to share their perspective is great, as evidenced by the A+ footage I believe Elisa provided.  But when you mix news with the free-for-all that is the internet, there has to be a line drawn somewhere.