Hey everyone! I am finally bringing you a post (potentially a series of posts) that I’ve been wanting to share for a long time now!

As many of you who follow my Instagram feed know, every week my friend Dave (HI DAVE! HAPPY BIRTHDAY!) hosts Monday Night Football at his house and cooks a meal typical of whatever city is hosting that night’s game. This tradition of his isn’t new – he’s been doing it for a few years now — I’m just new to the friend group. Actually, the moment I showed up Week 1 with Beer Mac n’ Cheese in hand was probably the moment they decided I was allowed to come back haha.

Anyway, instead of kicking in a few bucks for the food, I’ve used the MNF tradition as an excuse/inspiration to challenge myself to make creative dishes to share. Here’s a few of the themes we’ve had so far and what I’ve brought:

Week 2: At Cincinnati. David made breakfast pizzas with a base of Goetta, (a sausage native to Cincinnati) topped with scrambled eggs & spinach

Week 4: At New Orleans. Dave made traditional gumbo (left) and gumbo z’herbes (right), and I made and fried BEIGNETS! Those beignets might actually get their own separate post one of these Mondays. 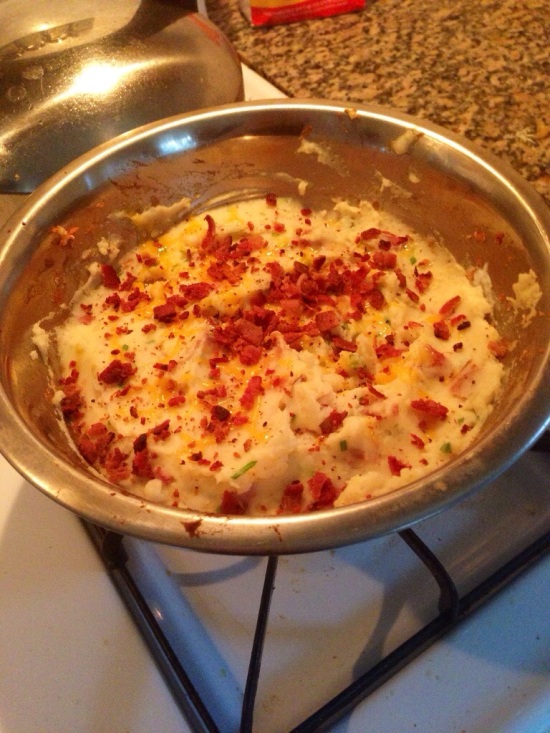 Week 5: at Atlanta. I actually couldn’t make it that week, but I had already made loaded mashed potatoes to go with Dave’s fried chicken and collard greens, and Landai’s peach cobbler. These guys were loaded with bacon, chives, and cheddar cheese. YUM.

We spent all day in the kitchen yesterday (seriously my happy place) preparing an Italian feast for tonight’s game, which is hosted by the New York Giants. My game plan was to make tomato sauce from scratch and two different kinds of gnocchi, and Dave prepped stuff for Caesar salad, garlic bread, and meatballs. Tonight he’ll also be cooking up minestrone soup, and grilled lamb. Needless to say…….we’re gonna have a lot of food.

First up was the sauce! For 2 kinds of gnocchi, I decided to make 2 kinds of sauces. The first was a tomato sauce (from scratch! See my recipe here) with onions, peppers, and mild Italian sausage. 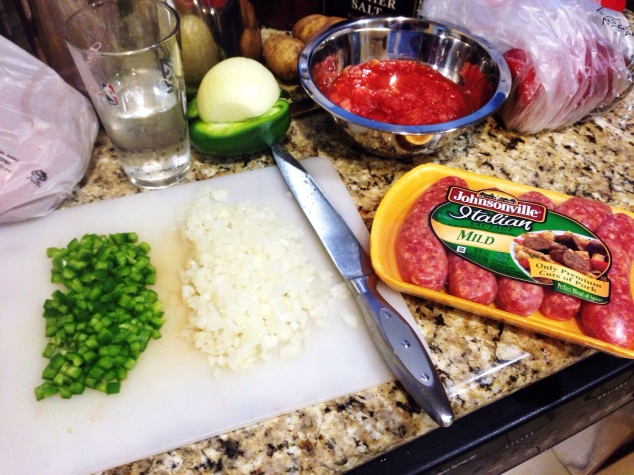 This was probably the most time consuming item of the day. I forgot how long it takes to peel and de-seed tomatoes! It’s totally therapeutic, though.

This is the best picture I got of my meat sauce. Saaarrrrrrry.

Next up was the gnocchi – I got regular Russet potatoes (to pair with the tomato sauce) as well as a few sweet potatoes (with which I’m hoping to pair with a mushroom cream sauce) and went to town.

Dave actually had a ricer, which was a total luxury. The last time I made gnocchi, I used a hand grater! Here’s the riced Russet potatoes with the cooked sweet potato.

Next it was time for the sweet potato. I think I over-cooked them, because it was a lot harder to gather the sweet potato into a dough. We decided to forgo the typical gnocchi ridges for those ones since they were too delicate, but I thought the ridges looked awesome on the regular potato gnocchi! 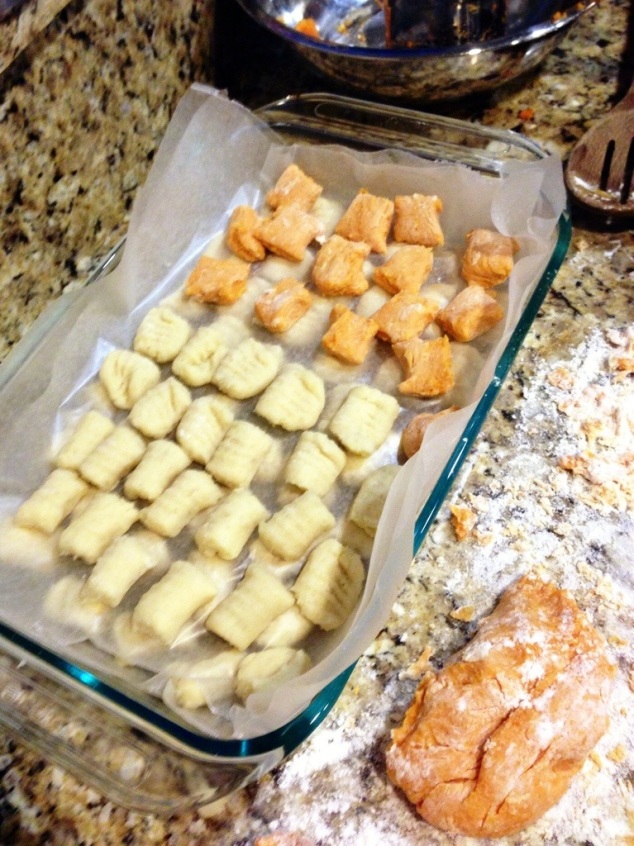 And voila! Into the freezer they went, and out they came a day later!

Here’s how they looked after cooking….they were a little mushy because they thawed a bit too much before I could get them into the boiling water. But they were still delicious! 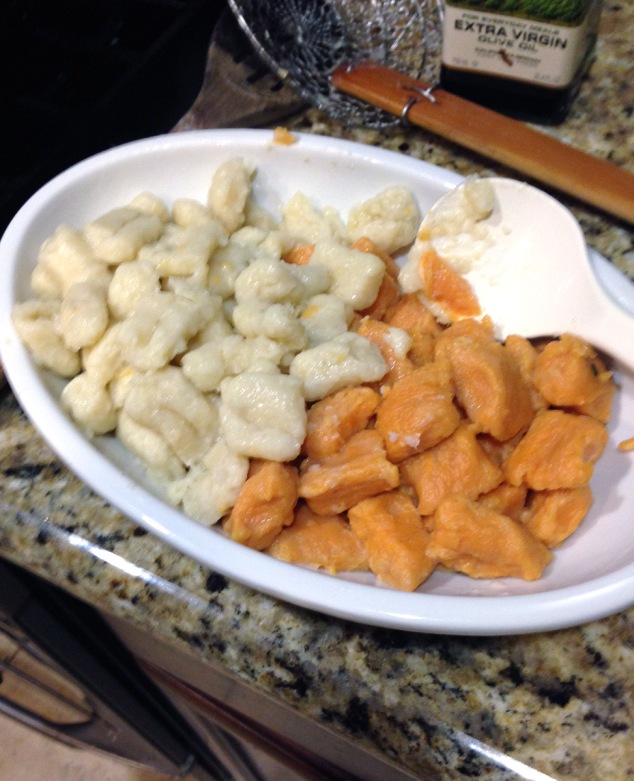 Here’s some of the other food: 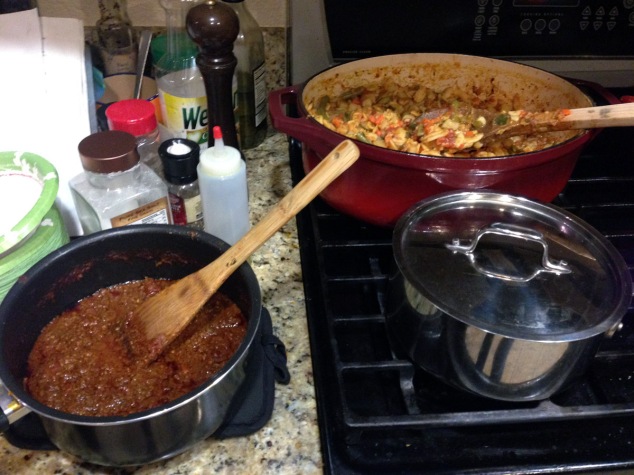 Nicole’s meat sauce with Dave’s minestrone stew in the back.

Do you have any fun cooking traditions you do with friends? MNF meals, “family” dinners, etc?

When I decide there’s some sort of classic recipe I want to try and make, this is normally what my brainstorming process looks like:

(don’t mind the note about the calcium…I took notes when my doctor told me I had low bone density, haha)

When it comes to popular recipes like banana bread, crockpot chicken, ratatouille, or gnocchi, there are a lot of people who claim to have found the end-all-be-all recipe for that dish. So I usually compile all their words of wisdom and try to make it into one epic combination of all their ideas. When I saw butternut squash gnocchi on Kristin’s (Iowa Girl Eats) blog, she made it seem so simple that I knew I had to try it. I looked up a couple of other recipes, as well as one from a blogger I consider a master (smitten kitchen) and got to work.

Here’s the most important things I gathered from the above 4 recipes:

When I got home to make my gnocchi, I realized that my sweet potatoes were actually rather small. Maybe only a little over a pound total.

First, you cook the sweet potatoes. I would recommend piercing them with a knife and roasting them. I would have, but my apartment was this hot the day I made gnocchi: 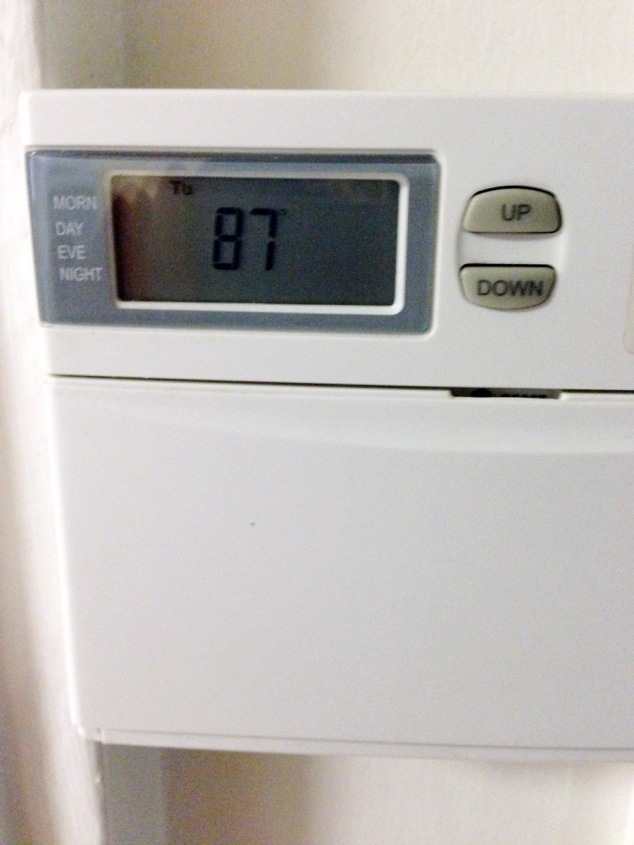 So I used the microwave.

(BTW, our microwave is broken and my roommate and I actually kind of totally live off leftovers, so we plugged in another one… in our living room.)

I did about 6 minutes (3 on each side) for the larger potato, and 4 minutes for the smaller one.

I decided to use my box grater instead of my food processor to break down the potatoes. It worked great…However, be advised that it’s not easy grating hot potatoes, and you will get some texture in your final gnocchi. I actually really liked it 🙂

After grating the potatoes is the time you will spread them on a plate so they can release steam. (You’ll probably need to release some steam too, after grating cooked potatoes. Go ahead, enjoy a glass of wine.)

Once the potatoes haves cooled down to a level at which you can handle them (pretty cool), gather them into a ball on a floured surface. 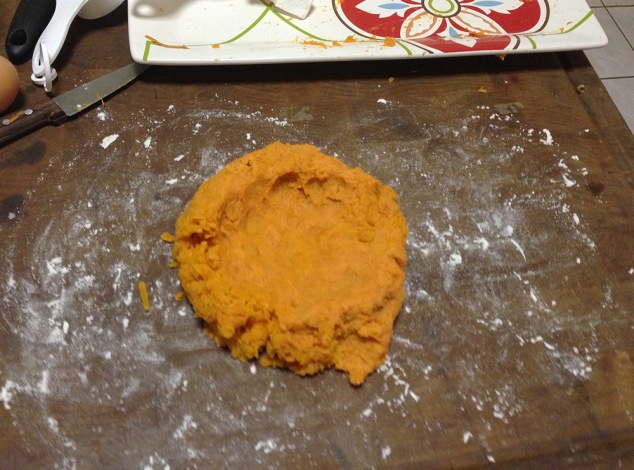 Create a small well and add egg yolk and 1/2 cup of flour. I went with less flour than was called for in the recipe, in case I needed to add more later (which I did).

You could also add the salt at this point, but I didn’t. I opted to add my salt into the pasta water instead.

Mix it all together and it should look something like this!

Split up your pasta dough into 3 ropes. This is probably the part where you may need to add a little bit more flour.

You should make your ropes about the size of the one on top (1/2-3/4 inch thick)…the other two created some ginormous gnocchi, haha.

Next step…cut off small pieces of each rope! I tried making the traditional ridges with my fork, but they still didn’t look anything like gnocchi, so I just went Kristin’s (Iowa Girl Eats) route and left them “rustic” 😛

To cook the gnocchi, simply drop them in boiling salted water and cook until they all float to the top! It doesn’t take long, 3-4 minutes max!

Not bad for my first homemade pasta, eh?! Grandma Kitty would be proud! (My great grandma from Italy for whom I was named…My parents opted to shorten Katherine to Katie instead of Kitty like she did, thankfully)

If you’re not going to eat the gnocchi right away, it freezes perfectly. Freeze gnocchi on a sheet when they’re still separated like this, then once they’re all frozen, toss ’em in a bag. Freezing them separately first makes it so they don’t all become a big pile of sweet potato in the freezer.

Stay tuned for another fall-ish how to later this week or next week!

Have you ever made pasta before? If not, what’s your favorite kind to eat? 😛