Unlike recent weeks, I wasn’t SUPER OMG DESPERATE for this week to be over. It’s been a relatively quiet week at work (busy for sure, but not OMG-wanna-rip-my-hair-out stressful) and I have kept it similarly quiet at home — I’ve been laying low and been in bed by 10:30 every night!

I decided on Monday to give myself a little detox, so I’ve not only abstained from alcohol for the past 5 days, but I’ve also limited my handfuls of cashews at work, and spoonfuls of Nutella at home 😉

In addition to the detox and walking/biking to work every day, I ran twice (3 miles on Tues & 5 miles on Thurs) and did strength building exercises twice (on Weds and this morning):

Wednesday’s workout has been my tried & true upper body workout for almost a year now. It was pretty much the only strength training I did (1x per week) while training for my half…It gets in some good upper body work, but the better benefit may be the core strengthening that comes from all those planks! If I have time, I also finish up with V-ups and regular ol’ crunches for good measure.

Because I’m not doing Thursday dodgeball this season, I enjoyed an early bedtime last night and a rare 6:30am Friday morning wake up call! I’ve been doing the above workout for so long that I decided to look for a new GPP Fitness workout to switch things up. I did 2 rounds of Cross Sectional, and I did the V-ups, Stab Situps and high windmills from t-AB-ata. My legs are burrrrning from Cross Sectional!

ANYWAY, I digress. This totally wasn’t meant to be a Fitness post! I just wanted to pop in and share a few things I’ve enjoyed this week, and even a fun HANDWRITTEN quiz that I yanked from Christina at Hungry Meets Healthy. Enjoy!

75 Thoughts Every Runner Has While Out For A Run

My Blend-turned-Real-life friend Becky has been pumping up Advocare products for the past few months…I texted her yesterday that I ran out of my beloved pre-workout supplement (fitmixer Clean Energy) and she happened to have just gotten a bunch of variety packs of Spark, AdvoCare’s energy drink mix. I ordered some and can’t wait to try it! I’m not big on supplements, but I do like using a pre-workout drink before my long runs. I’ll be sure to report back on how I like it! If you’re interested, be sure to visit Becky’s blog or click one of the above links to be taken to her store!

As you all probably know, How I Met Your Mother ended this week. Sadface. While I can’t say I’ve watched since the start of the show, I did start watching from the beginning about 4-5 years ago and have been hooked ever since. I love the writing, I love how they’ve kept us guessing about the Mother, and I lovelovelove the characters. I definitely cried multiple times during the series finale, and I have mixed feelings about how it ended, but I largely agree with this article about what went down. {spoiler alert in the article, obviously!}

And last but not least… you know those handwritten quizzes they have celebs fill out in Cosmo? Welp, I found one for bloggers! If you’re interested in filling it out, you can print out the blank template here. Enjoy!

Before you say anything about liking my handwriting, please take note that I toootally spent 5x longer than usual writing out every single word to make sure it was legible. HA.

Have a great weekend!

What do you do to treat your body when you need to detox?

Are/were you a HIMYM fan?

After hearing good things and seeing Peel’d at the Farmers Market selling their juices every weekend, I decided to jump on the bandwagon and do the Peel’d juice cleanse. Peel’d creates fresh juices every morning that they deliver not only to people wanting to detox, but also to people who “simply want to supplement their current lifestyle and diet with nutrient rich juices”. Something that I like about Peel’d’s detox program is that, in addition to the allotted smoothie and 2 juices per day, you are allowed to eat as many fruits and vegetables as you want (raw or cooked). It isn’t an all-liquid diet, like many cleanses are.

In fact, the first rule of the Peel’d cleanse is: “DO NOT GO HUNGRY. This process isn’t about depriving yourself, but feeding yourself large amounts of foods that will nourish, support and heal you.”

Foods not allowed on the detox are:

Peel’d also recommends snacking on olives, avocados, and small amounts of nuts as a snack.

No hangry Katie? I definitely like that approach. Normally, the Peel’d program lasts 5 days: Monday through Friday. I was unsure about jumping into the 5-day plan, since it seems kind of drastic, especially for someone who likes to exercise throughout the week and needs a lot of protein as a result. When I saw that they were offering a special 3-Day Independence Day program for $66, I decided to go for it.

3 smoothies and 6 fresh juices
Daily menus
An intro email with a meal plan, including snacks and awesome soup/salad ideas for dinner

For an extra $10, I could have also gotten the juices delivered to my apartment each morning. However, I opted to just pick them up on the way to work.

Before the Cleanse/Why I Did It:

You’re supposed to cut out caffeine and alcohol before the cleanse to “prepare”, and I can say I cut out caffeine, but alcohol…certainly not. I had at least 2 beers a day Wednesday-Sunday (plus more on Thursday and Sunday because of dodgeball and kickball), and some pretty non-clean food, thanks to a summer BBQ, froyo with the roomie, and some post-kickball chicken fingers. As a result, I didn’t fall asleep until 4:30am on Saturday night and was up for an hour at 3am Sunday night feeling hot, bloated, and nauseous. Of course, there are many factors playing into that, including but not limited to: 105+ degree weather, increased beer consumption, and some emotional stress I’m going through right now. That being said, I felt like a cleanse was probably a good idea, especially if I have more fun on the horizon with the 4th of July coming up.

I recently read in Women’s Health that cleaning up your diet for several days before a vacation or expected period of unhealthy choices will set your body on the right path and prepare it for that period of time. It seemed like a fun experiment, and the shortened 3 day length didn’t seem too intense.

{Though some of the guidelines suggest splitting up the smoothie, I decided to have the whole smoothie with breakfast, since I’m used to having a large breakfast.} 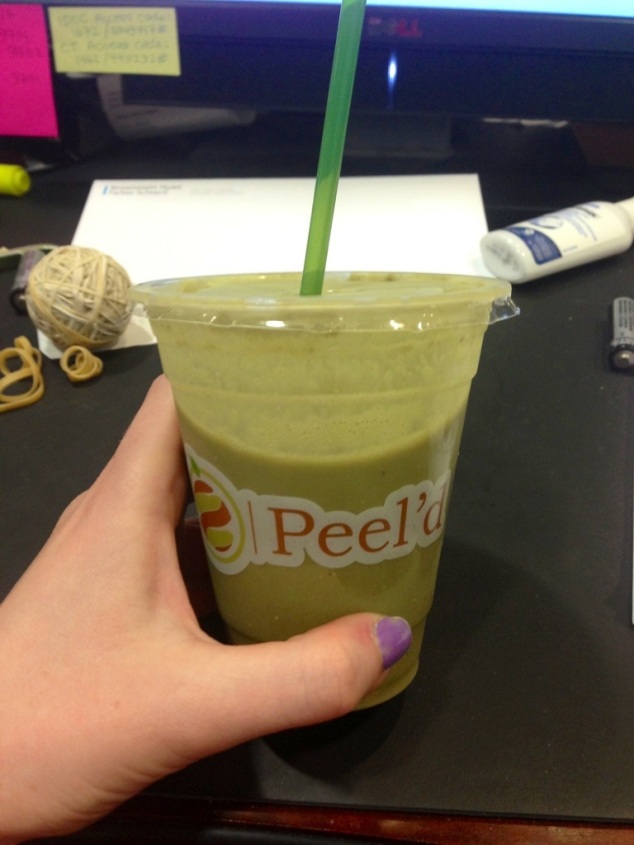 The verdict: Delicious! Tasted a lot like my own strawberry & banana smoothie. I didn’t even realize there was protein powder in it until I read the daily menu e-mail Peel’d sends out.

How I felt: The smoothie was filling enough that I didn’t feel the need to raid the breakroom jar of mixed nuts every 30 minutes like I usually do. I did start to get a bit of a headache, which could be attributed to several factors (didn’t sleep well, no caffeinated tea in the morning, been crying a lot lately)…My stomach started grumbling around 12:30, so I grabbed a couple of walnuts and left for lunch at 1 instead of my usual 1:30 or 2.

The verdict: WHEW, now I know why Becky doesn’t like juice with celery in it. Luckily, the tart lemon + green apple kept this juice pretty tasty.

How I felt: I went home for my small stir-fry lunch and had the juice after I came back, thinking it would delay hunger for a while. It worked! My headache definitely dulled a bit, but stuck around. 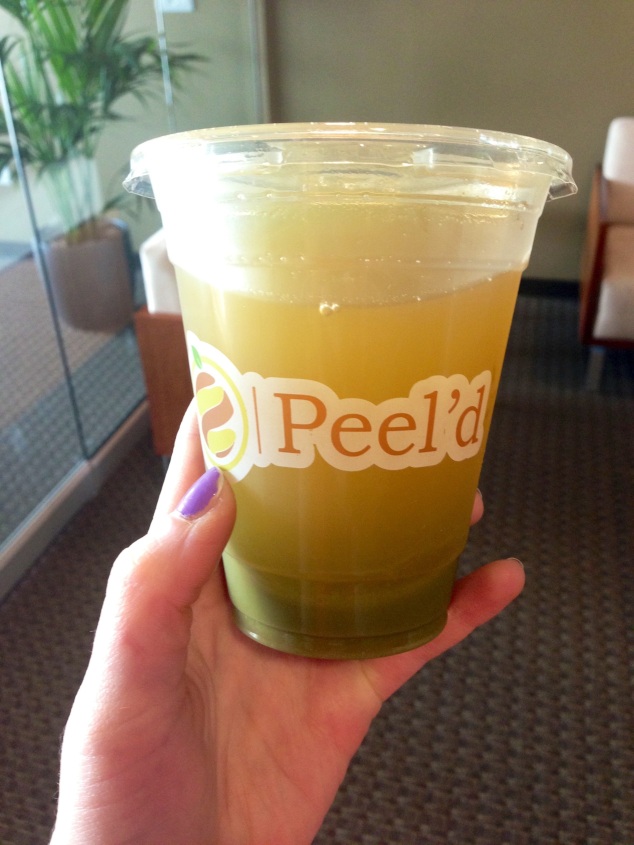 Green Goblin Juice (Kale, cucumber, celery, lemon, lime, apple, ginger)
Also ate: cauliflower, green beans & peas steamed with garlic & ginger. I was satisfied, but decided I probably should also have a salad. Made one with mixed greens, cherry tomatoes, and half an avocado with simple balsamic vinaigrette (balsamic, garlic, dijon, and olive oil). Had another glass of water and dandelion tea.

The verdict: Pretty good for a green juice! I’d had it before at the farmers market, so no surprises there.

How I felt: I had the juice right when I got home around 5:45 so that I wouldn’t be starving while I made dinner. After and during eating, I was so surprised I wasn’t more ravenous. I think I was right to fix up a salad even though I wasn’t hungry for it, because I probably would have gotten snacky later if I hadn’t.

I fell asleep early (at 11:30pm) and woke up naturally around 7:30am, 10 minutes before my alarm went off. Amazing. I also woke up with a flat stomach – something that hasn’t happened in weeks! A welcome reprieve from the bloating I’ve experienced lately. 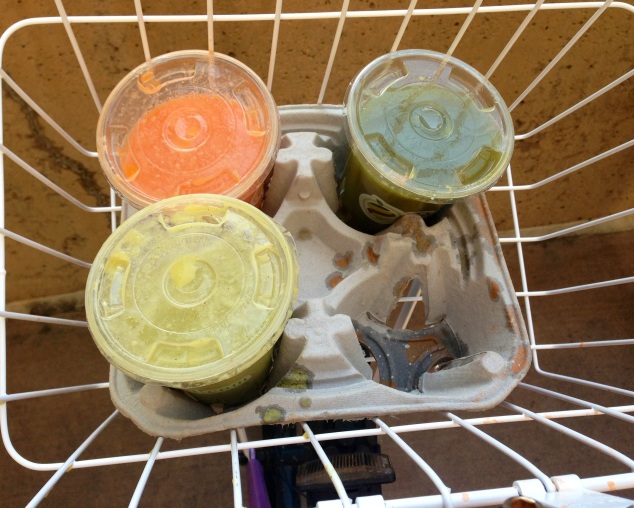 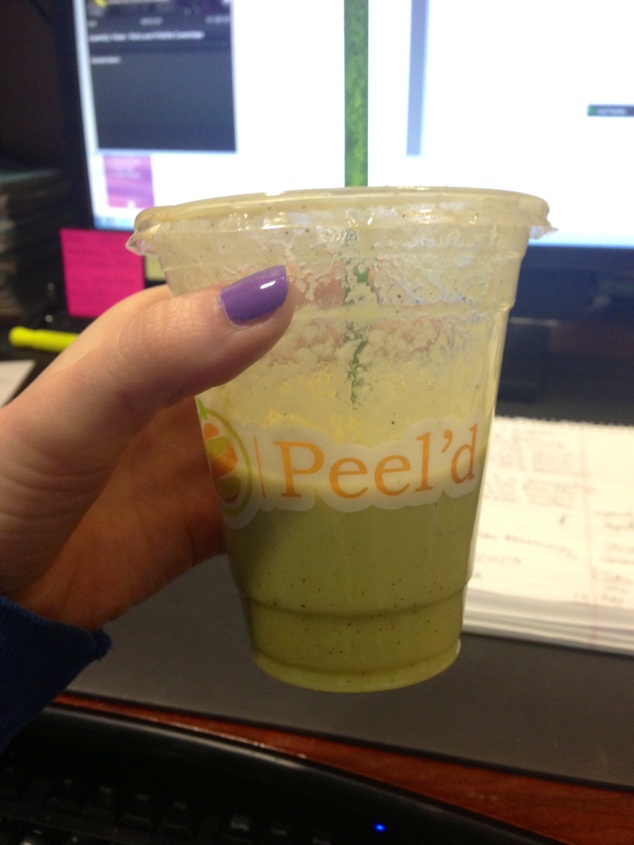 Green Smoothie (Cucumber, kiwi, mango, almond milk, veggie protein powder)
Also ate: half an avocado and a handful of nuts…and about 2-3 glasses of water throughout the morning.

The verdict: I was leery because it smelled like celery (apparently that was cucumber!), but there was an awesome vanilla flavor from the protein powder that made this green smoothie delightful!

How I felt: I got hungry much quicker after this morning’s smoothie (probably because I spilled part of it on my bike ride and had part of an avocado instead of the more filling nectarine), but after a handful of nuts, I easily made it to 1pm again. No headache today! 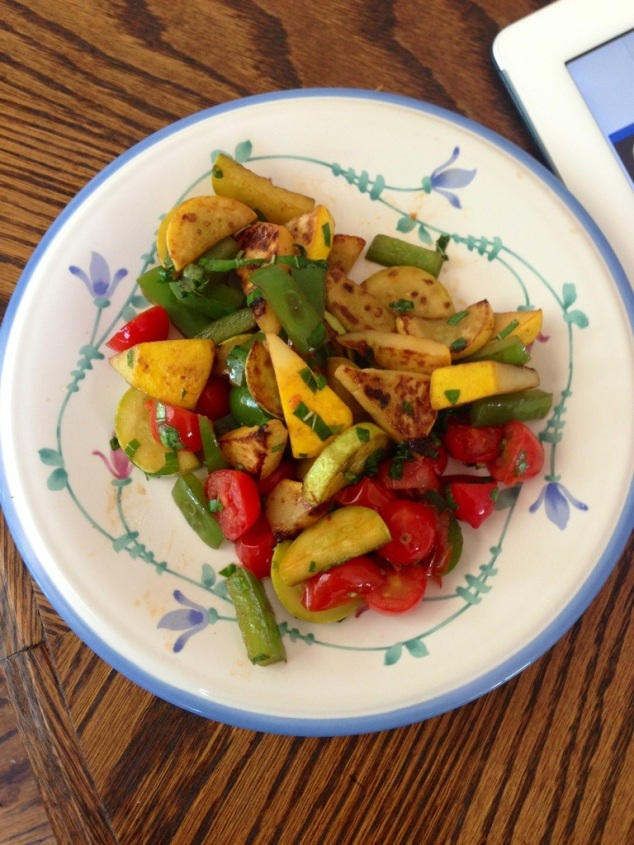 Green Goblin Juice
Also ate: Summer & pattypan squash, green bell pepper, & cherry tomatoes stir-fried in coconut oil with s&p and fresh basil. Another handful of nuts (Starting to fear I’m having too many, but it’s the only acceptable snack in our office!) and another glass or 2 of water.

The verdict: Already had this juice 🙂 It was definitely more lemon-y today which I loved!

How I felt: A little bit of dry mouth…maybe this 5th day of 100+ heat is finally catching up with me.

Orange Juice (Pineapple, yams, lemon, green apples)
Also ate: My mom made Pasta with Giardiniera Sauce and I had a bowl of the sauce (basically, a ton of veggies). Also some broccoli, a banana, and salad (chard, mushroom, carrots, olives, fennel, and a simple vinaigrette of apple cider vin + dijon + olive oil).

The verdict: This was the best juice yet!! It mostly tasted like pineapple.

How I felt: Great most of the evening! If I ever felt snacky I just grabbed a glass of water or some olives. I started feeling nauseous around bedtime, I’m not really sure what that was about. Possibly the heat again…

I’m already 1/3 done with my last day, but I figured I’d break it up little bit since this is already a really long post.

So far, I feel good on this detox but not OMG AMAZING. I think that’s partly because I’m not doing the full 5-day cleanse, and partly because I already eat pretty healthily…Unfortunately, I’m noticing that my appetite is already pretty low because of the aforementioned heat and emotional stress, so I’m predicting the biggest results I’ll get from this experience are a flatter stomach and a couple of pounds lost…which I’m not really looking for. But I do feel better than I did this weekend!

Have you tried a juice cleanse or a detox program before? How did you like it?

Enjoy your 4th of July! What are your plans? I’m heading to San Francisco to escape the heat 🙂