Something strange happened the other day. 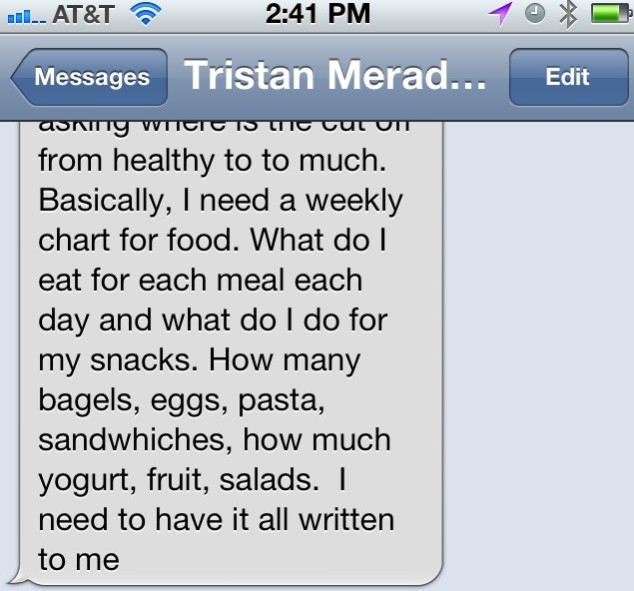 That is my boyfriend expressing interest in making a meal plan. This coming from a guy whose impulsive eating habits rival the Cookie Monster’s. A guy who usually goes without breakfast, eats fast food or microwave meals for lunch and linner, then gets off work at 9:30 and eats a bagel smothered in cream cheese and cheddar, followed by PB&J toast, followed by half a bag of Airheads.

Needless to say, I was skeptical.

Hmmm…I can blog about it, you say? Sign me up!

Of course, I’m kidding. As I’ve become a lot healthier during the time we’ve been dating (1 year next week!), I have consistently tried to make healthy meals for both of us. This was before the blog, and I would still want to help him even if didn’t have the blog to put his diet on blast  keep him accountable  share his journey. 🙂

T-Man recently took a job working on a congressional campaign, and it came with a bit of a pay cut. As a result, he has been using fast food and microwave meals to sustain himself through his 11 hour days, since he thought that was the easiest and cheapest way to do it.

He hasn’t gained much (if any) weight, but after nearly 3 months of the campaign lifestyle, it’s not hard to imagine that his lack of nutritiousness has had him feeling yucky and pooped. Not to mention, his bank account hasn’t been too happy with him. Here’s where the meal plan comes in.

My main goal was to plan simple meals he could make in the morning to avoid having to eat out. I looked up a couple of Excel templates for meal plans online, but decided to make one myself because a) I now have mad Excel skills and b) I like color coordination.

A huge key to being healthy and well-fueled is breakfast. Which T-Man now eats. He usually only has one meal during the work day, so I called that lunch — then I included a dinner “snack”, since I knew he doesn’t always have time in the morning to prep 2 meals, but didn’t think he should go hours without eating. He still eats dinner around 9:30 when he gets off, which I know is late, but I figure not everything about the campaign lifestyle is conducive to an ideal healthy diet.

I started by putting in the meals that are a given each week. He always joins me at the dodgeball bar on Thursdays, and I actually have time to make us breakfast on the weekends, for example. I also experiment with different meaty recipes on Sundays that I usually end up giving to him to use in his lunches.

From there, I got creative and used what I know about his eating habits and what he knows how to cook. I tried to balance protein and carbs, and give him more than one option for most meals. I also looked at Safeway.com to see what they had on sale that week, and I made a column on the right to fill in groceries needed for the meals I planned for him.

I found a really cheap frozen pizza from Open Nature, which is a healthy Safeway brand that uses hardly any processed ingredients in their products. Then, we went to Napa for half the weekend and missed the sale. . Oops.

This is the finished product: 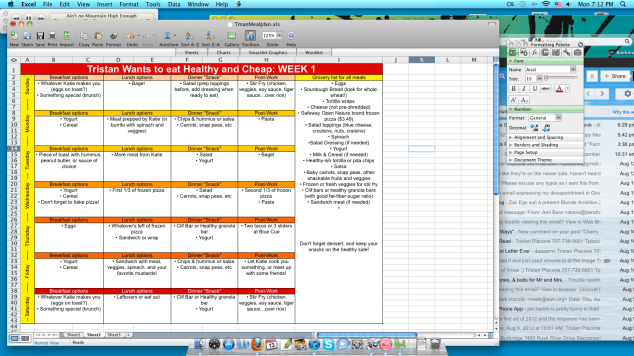 Though he hasn’t jumped on board 100% yet (Monday night instead of pasta, he had a burger, macaroni & cheese, and 2 beers…totaling $25), I was really excited to do this for him. It was a bit challenging at times (at first, I was planning Katie-sized meals, which wouldn’t even fill him up halfway), but also fun.

Do any of you plan out your meals from week to week? If so, is it more to stay healthy, or save money? Any tips on how to stick to the plan?

P.S. Remember how I sang goodbye to my cast on Monday?

Yeah, false alarm. My bone hasn’t healed and I have to wear a (removable) splint for 3 more weeks. That brings my total time in a cast/splint this summer up to about 9.5 weeks. I’m out of words to use to describe my frustration…