So, did anyone else spend most of the weekend watching the Olympics? I mean, I did a lot of other things, but it felt like every second I had some downtime, on went the TV and on came some random Olympic sport! Who knew archery could be so intense? I don’t have a TV at home, so I’ve been DVRing everything at T-Man’s house, or watching at nearby bars. Or, on my computer at work….which I may or may not be doing right now…

Friday evening, we went to an INCREDIBLE dinner at Formoli’s Bistro, a very well-known restaurant in East Sac. I’ve been wanting to try it for a while, especially since T-Man just moved nearby. Our opportunity came when he got the evening off on Friday. We shared a Chicken & Brie flatbread and their famous Whiskey Burger (possibly the best burger I’ve ever had!) and finished with this chocolate cake & port.

Next up came the Opening Ceremonies! Watched the festivities at home, then during the Parade of Nations walked to our favorite pub & caught the rest! 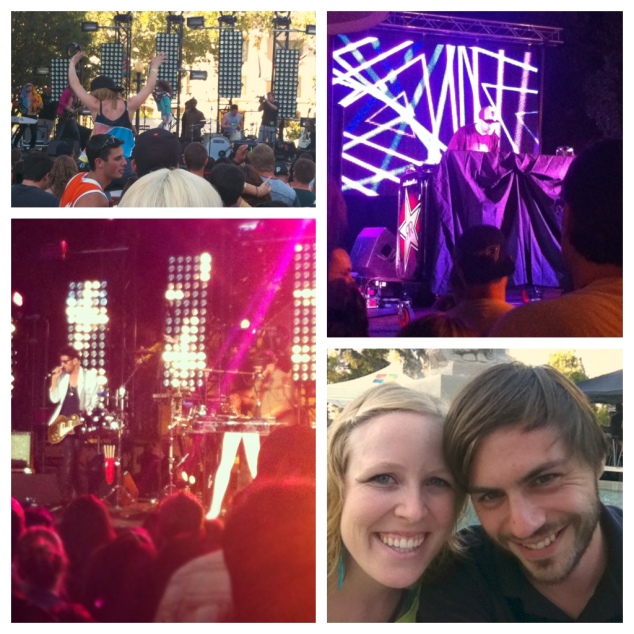 Saturday was Launch Festival. A group of friends from out of town came and we caught some awesome bands like Fame Riot, !!!, Grouplove, and my two favorites: DJ Shadow (right) and Chromeo (bottom left).

Another week, another gimpy trip to the grocery store! I got ingredients to make Thai Beef for T-Man to eat in his lunches for the next few days — My still-awful right handed handwriting — I came up with some amaazing cherry recipes, which I’ll be sharing later in the week!

What did you do this weekend? And which olympic events have been your faves to watch so far?

2 thoughts on “An Olympic Weekend in Photos”