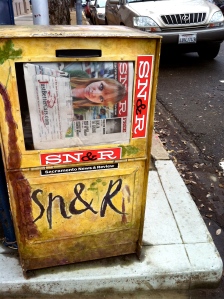 This is my face on the cover of a newspaper in a newsstand across the street from the State Capitol.

Let’s backtrack to when my life consisted of exercise videos and hours of Food Network viewing.

A few months ago, I did some freelance writing for the News & Review and was discussing the possibility of an editorial internship.  A few people at the weekly newspaper had the link to my blog, and eventually this led to a writer commenting on it and saying that he was writing a cover story about college grads moving home and wanted to interview me.

Meanwhile, I had taken it upon myself to call every single state senator’s office and pass out my resume at a handful of the Capitol offices that were hiring.  I ended up with 2-3 prospective internships, and was chosen for one at Senate President Pro-Tem Darrell Steinberg’s district office (yes, I had to put the whole title :-P).  I now work 4 mornings per week (unpaid), but I can actually say that my brain isn’t on its way to becoming slush anymore!  I get to do work – interesting work, for the most part, since the state budget is such a hot topic right now – and get out of the house.

I started thinking about what I had said to the man who was writing the article for the SN&R and realized what a capital L Loser I was going to sound like in the article.  I told him about how I stay home most of the day and watch TV, about my addiction to Food Network and frequent Facebook & Twitter sessions.  I immediately updated him on my newly acquired internship in a last-stitch effort to make myself sound better.  But after a photographer came to my home to take stylistic photos of me in front of my parents’ immaculate home furnishings, my worry shifted from my Loser status to my seemingly imminent Cover Girl status.  Suddenly, I was a self-conscious 13 year old girl again.

Then, my father brought these home. Instant reaction: laughter.

Me at that moment, to the me from several days earlier: “Don’t take yourself so seriously, idiot!”

The weirdest part of being on the cover of a widely circulated weekly newspaper looking like a disgruntled child was walking past news stands with my face peering out of them, and wondering if all the other people in the immediate vicinity also realized that it was my face.  I’m thinking probably not.  But it was still a strange sensation nonetheless.

Another interesting part of the reaction I received about the article was the number of friends of mine who thought it was so “cool” or “awesome” that I was on the cover.  If they thought it was awesome, they had clearly not read the article:

While it was certainly “awesome” to be on the cover of the newspaper, it came at a cost.  The ~agony~ of moving back home that I’ve now dealt with for months was put on blast, and those who didn’t think it was “awesome” tended to offer their pity instead.  To make matters even more interesting, I finally started an internship at the SN&R around the time the issue came out…I could not escape that damn newspaper!

Someone else has since claimed their spot on the cover, and my life has gone back to its original, ordinary state.  With two internships in fields I’m interested in (politics and journalism), my days have purpose again.  I am still struggling with finding others to relate to, and with carving out my own independence while living under my parents’ roof, but if the article and my progress in the past month or so have taught me anything, it is that as long as I am looking towards the future, I’m getting somewhere.